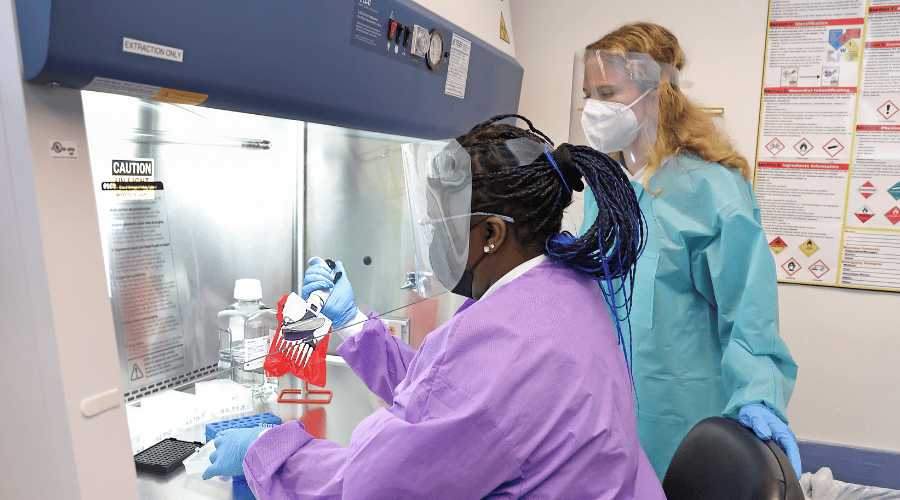 In 2022, the world was collectively compelled to endure a surge in viral outbreaks, the horror of the Russia-Ukraine war and rampant inflation, which has led many to a state of pessimism. But, the dramatic events of 2022 have overshadowed other, more reassuring news. In contrast to the gloom of this daily news cycle, there is positive change taking place at American Gene Technologies® (AGT™) in gene therapy and HIV cure research.

As of late 2022, AGT’s RePAIR clinical trial for AGT103-T has achieved its goals for both safety and durability endpoints. The Phase 1 data has been published in Frontiers in Medicine while the Phase 1’s analytic treatment interruption (ATI) study continues.

Additionally, new leaders have joined the AGT team, revenue-generating testing services have provided material support to research and development efforts and a video series, “The Cure Chronicles” offering interviews with HIV luminaries was launched. In parallel with AGT’s progress, a number of new gene therapies from peers have been approved.

Looking ahead, results from the Phase 1 trial’s ATI study will provide data on AGT103-T’s behavior when HIV is allowed to replicate, and how to maximize its effectiveness. Protocol optimizations for a Phase 2 trial are being compiled, and assuming a favorable nod from the FDA, a Phase 2 study may be launched after the final report on the Phase 1 and its ATI is submitted. With every passing day, AGT progresses in the direction of regulatory approval, and steps closer to its goal of proving that HIV can be cured using gene therapy.

2022 represents the culmination of many years of effort that has its roots in previous foundational work. AGT began 2022 with its first in-human clinical trial already underway, led by an experienced team with the necessary skills to navigate AGT103-T through the turbulence of drug development and regulation.

AGT Chief Executive Officer Jeff Galvin has assembled an impressive lineup of experts and advisors to advance AGT103-T towards pivotal clinical trials for a potential HIV cure. In late 2021, both Dr. Robert Redfield and Dr. Marcus Conant were appointed as Special Advisors to the CEO. Dr. Redfield has a long and distinguished history working in virology, immunology and clinical research, and has held senior positions with the FDA and CDC. Dr. Conant has an equally distinguished career with close ties to the San Francisco AIDS Foundation and decades of experience diagnosing and treating HIV patients.

Other advisors were brought in to AGT with domain-specific knowledge, including Dr. Drew Palin as business and strategy advisor. Dr. Palin has raised significant funds for life sciences startups and led multiple early stage companies as CEO that combine medicine and technology.  As 2022 progressed, AGT added additional experts to its roster. Dr. Jeff Boyle joined the team in June as Chief Science Officer, Dr. Barry Wells, MD, started as Head of Business Development, and Kathy Fowler came on as Director of Marketing.

Following a successful investigational new drug (IND) submission and FDA clearance in August 2020, AGT started its Phase I clinical trial designated RePAIR, shorthand for Restore Potent Antiviral Immune Responses. Enrollment took place over the subsequent months and the first major update for trial progress was announced in February of 2022. Every trial participant received the treatment, and none had suffered serious adverse events. Additionally, blood markers of efficacy were identified in multiple enrolled patients. Increases of virus-specific T cells were identified, which suggests that the cells carrying the gene therapy are able to function normally and interact with the surrounding immune system. This is an important quality of T cell therapeutics, which aim to coordinate a complete immune response. The trial participants at this stage showed evidence of enhanced antiviral T cell immunity.

The goal of AGT103-T – to cure HIV patients – is discussed in a report published earlier this year. In order to show efficacy in early-stage trials, investigators applied an approach that has been used in earlier HIV gene therapy trials, which is to interrupt treatment to measure the durability of the therapy. The ongoing Phase I trial targeted enrollment of adult subjects diagnosed with human immunodeficiency virus who have been taking an antiviral medication for at least two years.

With a strong team in place and the HIV trial running smoothly, the Institutional Review Board (IRB) overseeing the RePAIR trial gave approval for the trial investigators to proceed with ATI and withdraw trial participants from their antiretroviral medications. The modified T cells which comprise AGT103-T act like normal T cells which behave differently in the presence of HIV, making ATI an important step to assess the in vivo safety of AGT103-T. The ATI also provides a window of observation into the cells’ behavior in the body, though this data is limited by safety, dosage and timing restraints characteristic of Phase I trials. Nevertheless, the preliminary performance characteristics gathered during the ATI stage provide valuable insight to guide the next steps in the clinic. The ATI study officially began in summer 2022, when the first AGT103-T recipient was taken off of antiretroviral medication.

For the average person with HIV, it generally takes between four and eight weeks after they stop taking their antiretrovirals before the viral load rebounds. T cells like the ones that make up AGT103-T then coordinate a response to the now plentiful HIV, and multiple days pass before they execute their response. This suggests that the clinical trial participants should be measurable in terms of viral load a few months after ATI begins. The potential for a surge in viral load in combination with the staggered administration of AGT103-T means that the ATI trial participants are producing an abundance of data that AGT scientists are assessing. It is expected that data collection and useful analysis will be available as we move into 2023.

A July update confirmed that blood markers were properly engrafting, persisting, and apparently, remaining uninfected while reacting to and likely fighting HIV. In October, the AGT team updated investors on progress of the treatment interruption. The ATI participants are currently generating  three months of data per trial participant. Analysis will reveal important information about T cell behavior while HIV is actively replicating, as well as additional efficacy signals. In the meantime, primary and secondary endpoint data from the Phase 1 trial was recently published in the respected medical journal Frontiers, and further details regarding the study are expected in the coming months. After a preliminary review, the National Institute of Allergy and Infectious Diseases (NIAID) will be conducting viral reservoir and B cell measurements, which will provide critical data about supporting progress toward a potential HIV cure. Further steps include submission of the Phase I trial report to the FDA in February 2023, and development of the protocol for a Phase II study of AGT103-T.

Beyond RePAIR trial progress and the addition of leaders to critical posts at the company, American Gene’s other pursuits include the issuance of new patents, launching “The Cure Chronicles”” video series, attracting new investors and successfully continuing its infectious disease testing service.

Late in 2022, AGT added new patents to its portfolio. The methods and viral vector compositions protect innovative new approaches to directing the immune system towards tumors. As a platform-oriented creative company, AGT’s growing patent portfolio is critical to protect its gene therapies.

The Cure Chronicles is a video series featuring interviews with distinguished experts, including people with HIV, AIDS advocates, medical experts, policymakers and others, with the goal of shedding light on what it means to live with HIV. The video series recently won a BioBuzz Media Award. As of December, there have been fifteen engaging conversations, which can be found here.

American Gene has offered its testing capability to the public during the pandemic. In the early days of COVID-19, the company launched an express PCR testing service that has substantially improved the quality of service for physicians near AGT’s headquarters. The revenue generated from PCR testing has substantially offset research and development activity costs, without interrupting AGT’s primary mission of developing AGT103-T. Since the pandemic began, COVID-19 cases in the local area have decreased significantly, allowing AGT’s testing lab to adopt a wider range of tests, both serving a public need and providing long-term financial support for AGT’s research.

As AGT advances its programs, the company continues to attract new investors. In April, Seattle-based Ride Wave Ventures, which focuses on companies with advanced technologies in software and life sciences, provided an undisclosed investment in AGT to support further development efforts for HIV, cancer and phenylketonuria (PKU). AGT has also added a number of other private individual investors this year who are excited about gene therapy’s potential.

While AGT advanced its Phase I HIV trial, other new gene therapies were also achieving important milestones, including regulatory approval. In parallel with the advancement of AGT103-T, the FDA ordained several new gene therapies that are now available for patients. Some of the new approved therapeutics this year include CSL Behring’s Hemgenix for Hemophilia B and an exciting double approval for Bluebird Bio’s pipeline with Zynteglo and Skysona, which address Beta-Thalassemia and Cerebral Adrenoleukodystrophy, respectively.

One of the notable features of the approved gene therapies is their price. Hemgenix has been listed at $3.5 million, Zynteglo goes for $2.8 million a pop and Skysona is $3.0 million. These prices are high, but analysis shows that they can save money over the life of the patient. For Hemgenix, CSL Behring says the Hemophilia B treatment could save the healthcare system $5.0 to $5.8 million per person, as it is expected to eliminate the need for regular injections of Factor IX. In the hemophilia space, there are other gene therapies in development that may provide a competitive landscape helping prices decline.

In the EU, PTC Therapeutics was granted marketing authorization for Upstaza, a therapeutic designed to address Aromatic L-Amino Acid Deficiency (AADC). Upstaza broke new ground as the first marketable gene therapy infused into the brain, and has shown transformational neurological improvements in long-term clinical studies, with the first dose occurring in 2010. Also in the EU, BioMarin’s Hemophilia A therapeutic, Roctavian, was granted conditional marketing authorization. The approval in combination with Roctavian’s orphan drug designation grants BioMarin 10 years of market exclusivity within the parameters of the conditional approval, a boon to business for the BioMarin team and an efficient deal to the healthcare system which would otherwise shoulder the cost of regular Factor VIII infusions.

2022 has been a good year for gene therapy, providing a positive outlook on further progress in 2023 and is a reason for future optimism. Incurable conditions now seem closer to becoming solved and researchers are leveraging the gene therapy toolkit to solve the root cause of many diseases with cellular precision. Gene therapies aimed at chronic conditions with high long-term cost have gained momentum and validated the economic model underlying the gene therapy revolution. As the field gathers momentum, we hope to see an even higher pace of curative gene therapy approvals. Genetic technology is here, our knowledge of human biology has never been so comprehensive, and the field is actively solving the genetic errors of disease after disease. Here’s to 2023!