We are fortunate to be living in the decade of cancer cures. Our understanding of the immune system and how it fights cancer is being translated into clinical products with fewer side effects and greater benefit than conventional cancer therapy. AGT is a part of this revolution as we are creating genetic drugs that will increase treatment potency, modify the immune system, broaden the types of cancers treated, and offer the greatest benefit to the largest number of patients. AGT is active in the emerging immuno-oncology industry and seeks to be a field leader.

The Landscape of Current Immuno-Oncology Products

Currently, there are four types of immuno-oncology products for cancer therapy:

The ImmunoTox program is AGT’s response to a formidable challenge: Can we develop a genetic drug that targets solid tumors, avoids genetic manipulation of T cells, activates a natural mechanism for tumor destruction, and works against a broad range of tumor types? The answer is YES, and the drug is AGT’s ImmunoTox.

ImmunoTox is a genetic medicine that is delivered using a 3rd generation, lentivirus vector. Vectors of this type have extensive proof of safety in clinical trials and are the basis of some newly-approved cancer therapies. In AGT’s case, the lentivirus vector is delivered to sites of solid tumor growth where it penetrates tumor cells and alters their normal metabolism. ImmunoTox slows the growth of tumor cells but causes them to over-produce a small molecule danger signal that activates γδ T cells (learn more about γδ T cell therapy here) to become potent killers of cancer cells.

The temporary activation of γδ T cells by ImmunoTox vector is expected to resolve once the tumor is eliminated. Unlike CAR-T, we do not make genetic changes to T cells and do not expect long-term, off-target effects including destruction of normal cells. Unlike oncolytic virotherapy, we use safe and effective lentivirus vectors to trigger a natural anti-tumor immune response.

The γδ T cells in blood become highly activated by the tumor danger signal and quickly become cytotoxic (capable of killing tumor cells) as part of their normal function. Luckily, the cells have exquisite ability to distinguish normal versus malignant tissue and killing is highly specific for tumor cells. When stimulated by genetically modified tumor cells carrying ImmunoTox, γδ T cells will attack a broad range of tumor types whether or not the target cells have the ImmunoTox genetic variation. Once cells are activated by ImmunoTox-modified cells, even if the modified cells represent only a fraction of the entire tumor, the activated γδ T cells can kill the primary tumor and even secondary tumors or metastases that were not modified by our lentivirus vector.

Have Others Tried to Develop γδ T cell Therapies for Cancer?

Efforts to understand human γδ T cells and their effects on cancer go back more than 2 decades beginning with the discovery of small molecules (phosphoantigens) that stimulate γδ T cell proliferation and activate their capacity for tumor cell killing. Phosphoantigens are normal cellular metabolites. Some drugs, specially aminobisphosphonates for treating osteoporosis, inhibit the metabolism of phosphoantigens causing them to accumulate in tumors and begin to stimulate γδ T cells. Early studies proceeded with the idea that phosphoantigens or aminobisphosphonate drugs could be administered systemically through intravenous injection or oral delivery, along with T cell growth factors known as cytokines. The combination would stimulate γδ T cells and activate their tumor killing mechanism.

Several clinical trials were conducted in the past 20 years to test the phosphoantigen or aminobisphosphonate plus cytokine methods for activating γδ T cell killing of tumors. In most cases, the studies showed clear evidence for in vivo stimulation of γδ T cells and in some cases showed evidence of tumor regression. Cancers tested during these studies included breast, prostate, lymphoma, colorectal carcinoma, renal cancer, and myeloma. Here, you can see the breadth of cancer targets that we discuss as a strength of the ImmunoTox program. These studies did not progress to late stage trials and did not produce approved cancer therapies because treatment potencies were not high enough and cytokine injections were very unpleasant due to toxicity. The obstacles of potency and adverse effects of therapy stalled the progress of γδ T cell cancer treatments. AGT saw these difficulties as technical barriers and addressed them through the development of better technology.

How Does AGT’s Technology Work to Improve the γδ T cell Attack on Cancer?

The ImmunoTox vector (in fact, a family of vectors specialized for individual clinical situations) penetrates tumor cells and inserts a new gene into the cancer cell genome. This gene suppresses the expression of enzymes that use up phosphoantigen and turn on the cancer danger signal. When a cancer cell has very high levels of the phosphoantigen due to the effects of ImmunoTox, it is potent for attracting and stimulating γδ T cells in blood that now infiltrate the tumor and begin the destructive process. AGT has used many laboratory tests to confirm the activation of γδ T cells that are exposed to cancer сells carrying ImmunoTox. In an early experiment (Figure 1), we used the first ImmunoTox vector (LV-ImmunoTox) to insert the suppressing gene into PC3 human prostate cancer cells or HepG2 liver cancer cells. As a control, we used lentivirus vector carrying a junk sequence with no function. When the genetically modified tumor cells were mixed with γδ T cells fresh from human blood (here labeled as Vδ2), we saw a big increase in the production of a cytokine (TNF-α) that is used as a marker for this type of cellular activity. Comparing the amounts of cells expressing TNF-α after being exposed to control or ImmunoTox-modified tumor cells, we see a large increase in γδ T cell activation (red circled areas) only when tumor cells were modified by ImmunoTox vector. 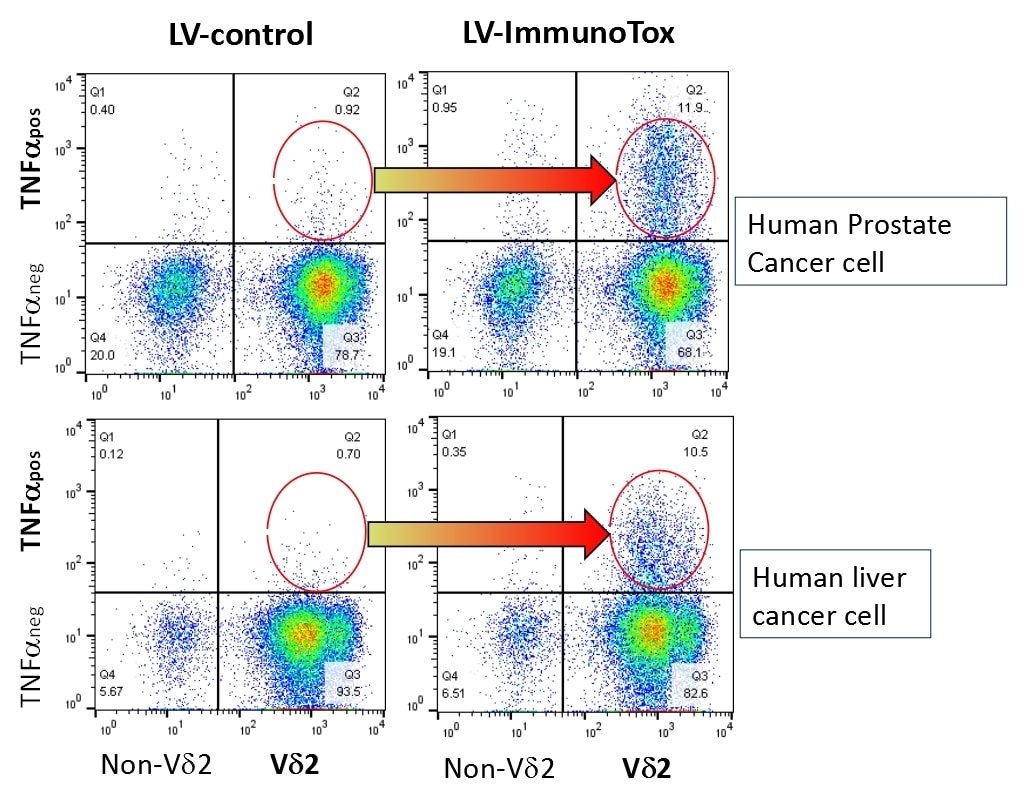 Based on experiments like this one and direct tests for tumor cell killing, AGT developed a model to explain what we expect from the clinical use of ImmunoTox vectors (Figure 2). We know it will be impossible to deliver the ImmunoTox vector to every cell in the tumor. This practical problem has stalled previous strategies for viral vector therapy of cancer. However, the way that ImmunoTox works is different and does not require blanket coverage. Once ImmunoTox modifies some of the tumor cells, it will initiate a powerful activation of γδ T cells (T), shown in the figure as red tumor cells that accumulate high levels of the gold danger signal (isopentenyl pyrophosphate or IPP). The modified tumor cells are recognized by gamma delta T cells which become activated and turn on their tumor killing mechanisms. The activated gamma delta T cells are capable of distinguishing tumor cells from normal cells and can attack all cells in the tumor. This is an important key to ImmunoTox function: once the γδ T cell is activated, killing is not restricted to the modified tumor cells; it is effective against all cells in the tumor. This results in tumor destruction and, if the original signal is sufficiently strong, activated gamma delta T cells will circulate, recognize secondary tumors or metastases, and attack them as well. It is important to stress, γδ T cell killing of tumors acts on a broad spectrum of cancer making this a nearly universal approach to malignant disease. 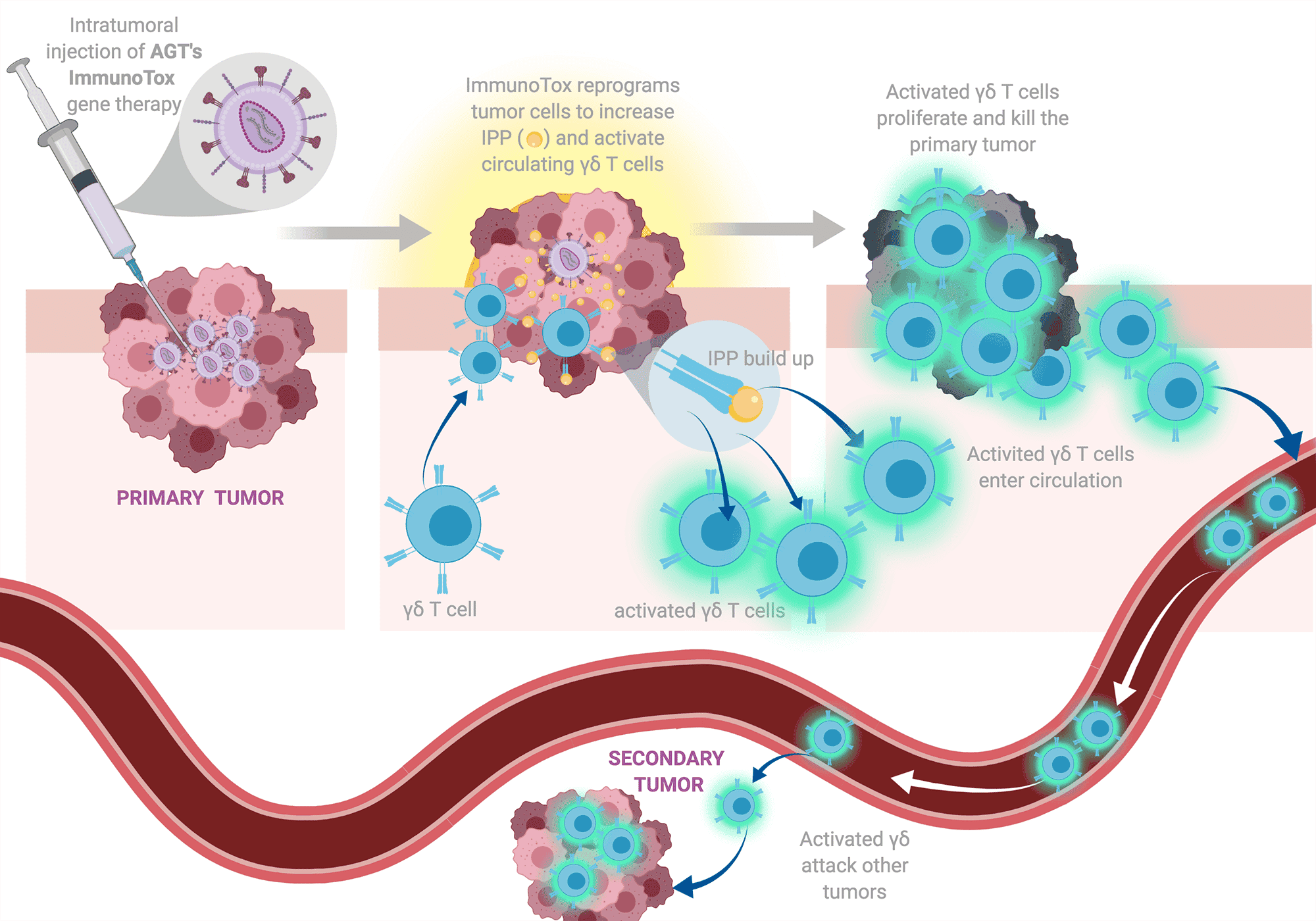 AGT has tested this concept in mouse models for cancer. Because human γδ T cells only attack human cancer, we used special mice that have no immune system of their own and can be used to study human cancers (the xenotransplant model). For our studies, we concentrated on the cancer lines (models of human cancer) representing prostate and liver cancer, and tested the effects of several different versions of ImmunoTox vector plus human gamma delta T cells injected into these mice.

Uniformly our mouse studies showed highly potent effects of ImmunoTox, with nearly all mice having complete elimination of their tumor. Following these initial studies, we are moving forward with greater emphasis on mouse models for liver cancer because that is a priority objective for AGT. These studies are ongoing and are showing great promise for the potential of ImmunoTox to be an effective therapy for liver cancer.

Hepatocellular carcinoma (HCC, liver cancer) was selected as a high priority target for ImmunoTox therapy based on several features of this disease: 1) liver cancer is often treated by cannulation of the liver which provides direct access to the tumor site and allows for direct, highly efficient delivery of the ImmunoTox lentivirus vector, 2) HCC is a medically significant disease due to the increasing incidence and fast disease progression, and 3) treatments for HCC are improving but only slow disease progress and do not eliminate the tumor. AGT believes that the application of ImmunoTox to HCC will be an important contribution to medical oncology and will prove the value of our approach and the potential for treating a variety of other cancer types. Our outstanding Oncology Scientific Advisory Group and key opinion leaders help to guide the clinical development of ImmunoTox as we continue the path to clinical trials in HCC and identify other cancers that may be particularly suited for early tests of the ImmunoTox therapy.

AGT’s ImmunoTox program is harnessing the exquisite potency and specificity of γδ T cells to attack a broad range of human cancers. We do not need to discover new tumor antigens or generate new recognition molecules because we are activating T cells that naturally attack cancer but need a “booster” to eradicate established tumors. AGT has been granted 8 U.S. patents for ImmunoTox, which is emerging as an important breakthrough technology in the war on cancer, and we look forward to clinical development and testing of these exciting new genetic drugs for cancer therapy. 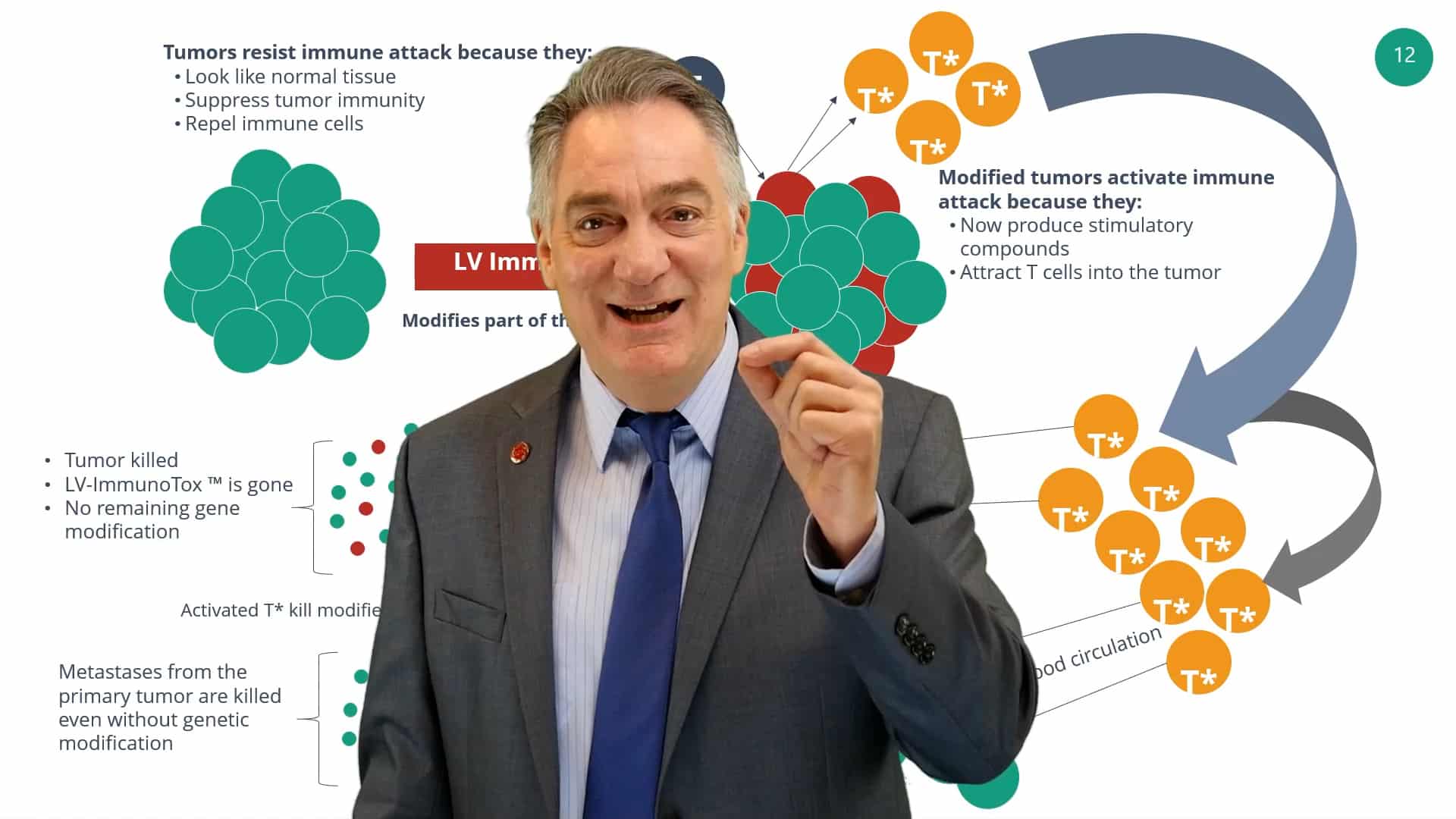 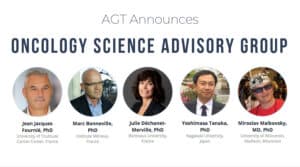 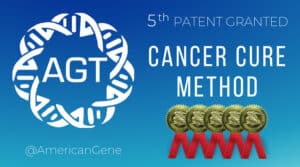 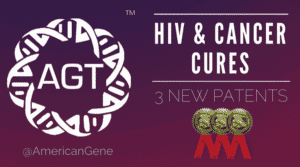 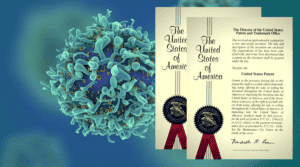