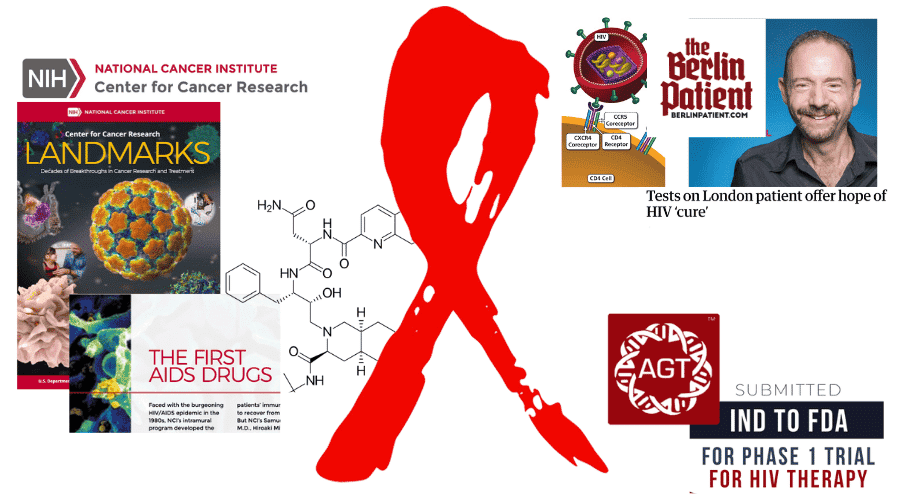 You don’t have to look far to find someone affected by HIV. It is estimated 1.1 million Americans are infected with the virus. The HIV virus has a storied history which we think began in the United States in 1968. Life might be easier if all things were black and white or had a root of 1. But, life almost never presents that way and HIV is no exception. In the case of HIV, the presumed root of 1 was a 16-year-old boy from the midwest. However, given the patient had never left the midwest, or ever received a blood transfusion the disease must have been present in the United States long before this case. We can’t know how the disease got to the US, but we do know the unlikely organization who took the first action.

Responding to the rapid spread of HIV, scientists at the National Cancer Institute (NCI) set up a program to develop drugs for the treatment of HIV. Their team was ultimately responsible for the development of the first HIV treatment, Azidothymidine (AZT). While NCI was the focal point of efforts leading to the first treatment for HIV, many scientists and organizations contributed to the success of the program. The history of AZT has several odd contributors from earlier work which seemed then and now quite unrelated. For example, It had been postulated that the cause of most human cancer could be retroviruses; viruses that integrate into the host's genome. This theory was developed because a scientist had discovered that some avian cancers were caused by retroviruses (HIV is a retrovirus). While it turned out that retroviruses are not the cause of most human cancers it was fortuitous scientists had logged years of work studying bird cancer. For that purpose, they had developed several antiretroviral drugs including a precursor of AZT. With the help of numerous scientifically odd discoveries and correlations, AZT gained FDA approval in 1987.

In 1995, Saquinavir became available. This heralded a new era for HIV. Saquinavir a protease inhibitor was able to hold the virus at bay by binding in the active site of an enzyme key to viral maturation. AZT’s mechanism of action only prevented the virus from integrating new copies into the host genome allowing the existing provirus to continue producing mature viruses. Mortality rates of HIV patients plummeted over the following years and HIV started to be seen as a manageable disease. For the first time since the supposed patient zero in the Midwest, the death toll was declining.

In 1996 it was discovered that about 0.7% of the Northern European population carried a type of immunity to the virus. That immunity is based on a mutation of a receptor called CCR5. CCR5 is the co-receptor which HIV uses to enter the cell. This immunity mutation cuts the end off of the protein rendering it invisible to HIV. People who have one mutated copy of CCR5 (inherit the mutation from only one of their parents) naturally delay the onset of AIDs for several years. People who have two mutated copies of CCR5 (one from each parent) cannot be infected by the virus and have the ability to clear the virus from their system. People with two mutated copies of CCR5 are immune to the most common strains of HIV (CCR5-tropic strains).

The first case of an individual being cured of HIV was reported in 2007. A man named Timothy Ray Brown received a bone marrow transplant from a person who carried the immunity mutation for HIV. Bone marrow is the manufacturing warehouse for white blood cells and white blood cells are those cells which HIV infects. Therefore, the transfer of bone marrow produced “replacement” while blood cells with the immunity mutation. This new immune system served to protect Timothy from the virus. Timothy Ray Brown has been HIV-free for more than a decade.

Since Timothy was cured, several attempts have been made to repeat the process of bone marrow transplant from CCR5-deficient donors to cure HIV. There has even been a recent success (see the London Patient). However, there are several reasons why a bone marrow transplant is a poor choice for the treatment of HIV. The procedure is traumatic, dangerous (frequently fatal) and there are very limited CCR5-deficient donors. To even be considered an ethical course of action the patient must have both HIV and Leukemia.

But, what if there was a way to introduce the immunity mutation to individuals without the dangerous and painful procedure of a bone marrow transplant?

31 years after the original treatment for HIV was produced at the National Cancer Institute a functional cure for HIV is being developed across the street from NCI’s Rockville facility on Medical Center Drive. Within a year, American Gene Technologies expects to arrive at phase I clinical trials with a gene therapy designed to cure HIV. The curative treatment is built on a platform of many years of science and the mechanism of action which cured Timothy Brown. The most fundamental discovery to creating a curative agent is the portion of the population who carry the immunity mutation to the virus. Simulating the dysfunction of the CCR5 receptor with gene therapy allows AGT to transfer the immunity mutation to individuals already infected with the virus.

AGT has performed several successful pilot runs of HIV infected volunteer patient’s blood. AGT has submitted an Investigational New Drug application to the FDA (October 2019) and hopes to soon obtain FDA approval to reinfuse the blood product into patients in a Phase I human trial. Given the pilot run successes, the team at AGT feels confident a durable lifetime cure is possible with a single treatment. Like Timothy Ray Brown, patients treated with AGT’s cell therapy should gain an immune system capable of fighting and defeating HIV. Unlike Timothy, there will not be a need for a dangerous (and traumatic) bone marrow transplant. Rather, patients will sit for a ~30 min blood draw which captures white blood cells (leukapheresis). They are then free to go about their lives. Those cells will undergo an 11-day cell process and gene therapy in a cell processing machine. Patients will return to be reinfused by IV. If AGT is successful, we may see HIV eradicated in our lifetime.